Quite possibly the smartest thing you can do as an author, publisher or expert is to build a platform of raving fans.

Fortunately, one of the best and easiest ways to attract new buyers, clients and fans to you is through a podcast.

Good news… Elite Online Publishing can create and help you start your own podcast and keep it going every week.

END_OF_DOCUMENT_TOKEN_TO_BE_REPLACED

Thomas Fox, the Compliance Evangelist, is one of the leading writers, thinkers, and commentators on the nuts and bolts of compliance. His always practical advice is now available in one volume, The Complete Compliance Handbook. This book incorporates the most recent pronouncements and guidance from the Department of Justice, including 2017’s Evaluation of Corporate Compliance Programs and FCPA Corporate Enforcement Policy, to provide the most up-to-date advice on what constitutes a best practices compliance program.

END_OF_DOCUMENT_TOKEN_TO_BE_REPLACED

JMW was born in Texas. The son of a rodeo cowboy and businessman. He joined the Marine Corps during the Vietnam war and served in a military police unit. He followed that line of work after the military, serving as a police officer. Through many trials, he was converted to Christianity and attended a seminary where his faith in Christ was solidified.
He worked with several churches and traveled extensively internationally during the 90’s. Through his experiences of seeing the world and understanding that man needs a Savior, he began writing to not only share life experiences but to, more importantly, share his Savior.

END_OF_DOCUMENT_TOKEN_TO_BE_REPLACED

On this Elite Expert Insider with Melanie Johnson and Jenn Foster, you’ll learn one of the chapters in the book: 7 costly mistakes you could make when choosing a publisher.

Self-Publishing Secrets –  How to Market a Book. Melanie Johnson and Jenn Foster talk about how to market your book. They talk about how often to post on Social Media and how to use your book to make more money in your business.

END_OF_DOCUMENT_TOKEN_TO_BE_REPLACED

What do stars, galaxies, the solar system and our entire universe say about the existence of a creator? Is it more than mere coincidence that human life is born into this world? If there is a creator of life, how does one connect with such a being? Is there life after this life? These questions and many more are addressed in a compelling manner as “Angelo” is encouraged to embark on his own personal journey in search of the profound reason for life and his own existence. Realizing that not answering the door when death knocks is not an option, Angelo must wrestle with understanding his personal relevancy and how that impacts his connection with others as well as the creator. This thought-provoking personal journey reveals the challenges and inquiry everyone must face at some time in their life.

Mike Magana, along with his parents, immigrated to the United States from Mexico when he was a young child in 1952. After growing up in West Texas, Mike was married at the age of nineteen and he and his young bride of the same age moved to Southern California where he began working as an aircraft machinist. While there, he furthered his education at the Control Data Institute which proved instrumental in launching his long and successful profession in computer software development. During his career, he benefitted from developing relationships with some of the leading authorities in his industry including personnel involved in Information Technology at Cape Canaveral. After his twenty-seven year career in software development, he then entered the field of insurance and financial services, retiring from Chase Bank in 2001. Having three near-death experiences throughout his life as well as the responsibility of his father’s burial, Mike was forced to come to grips with the reality and inevitability of death, but also, and even more importantly, with the reason for his own existence. This confrontation with real-life issues has transformed not only his thinking, but his very purpose in life. Mike and his wife of fifty-two years reside in Texas and have three grown children and seven grandchildren with whom they have formed a very special bond.

Learn more about Mike by clicking on the link below:

Do you want to start a podcast? Are you unsure what you need to do to get started? Jenn Foster and Melanie Johnson interview Paul Colligan, the Podcasting expert! Paul Colligan helps others leverage technology to improve themselves and broaden their audience with reduced stress and no drama. Listen in to learn the best practices when podcasting.

Learn more about Paul and Podcasting by clicking on any of the links below:

Melanie Johnson & Jenn Foster interview Ed Rush who explains the secrets behind the 21 Day Miracle. High-Level Business Coaching for entrepreneurs. 950 miles an hour. Now that’s fast. But it’s not nearly as fast as Ed Rush flew in his combat career as a decorated F-18 pilot, which included over 50 combat missions and 2 tours to Iraq. While in the Marines, Ed served as one of the country’s leading instructors on aerial dogfighting and recently worked as a key player in the development of the new F-35 Joint Strike Fighter. Ed is a sought-after speaker, bringing his dynamic gifts to the stage in engaging ways that make his clients look great. Ed also serves as the “secret weapon” that over 300 companies have brought in “through the back door” to help them increase profit & decrease waste, consulting them with honesty and effectiveness. After 2 combat tours to Iraq, Ed left full-time active duty to speak, write, and share a message that will change the world. He has achieved all of this despite possessing a below average intelligence (case in point: Ed failed Kindergarten). Ed’s books and expertise have been featured on CBS, FOX, ABC, and NBC.

Grab your Copy of the #1 Best Selling Book, The 21 Day Miracle And Get Instant Access to the Free Training at:

Learn more about Ed at EdRush.com 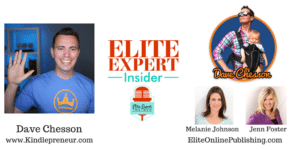 Watch the PODCAST NOW on Apple Podcast or on Our YouTube Channel.

Or visit our PODCAST  right here on our website.

Read more and listen to the Podcast! 🙂

Watch the PODCAST NOW on Apple Podcast or YouTube below.

Jenn Foster and Melanie Johnson interview Kate Frank. You have a book trapped inside YOU and it is screaming to be let out. You think about what your book would say almost every day. When you look at available books on your subject matter, you know you have something more to add to the current knowledge. 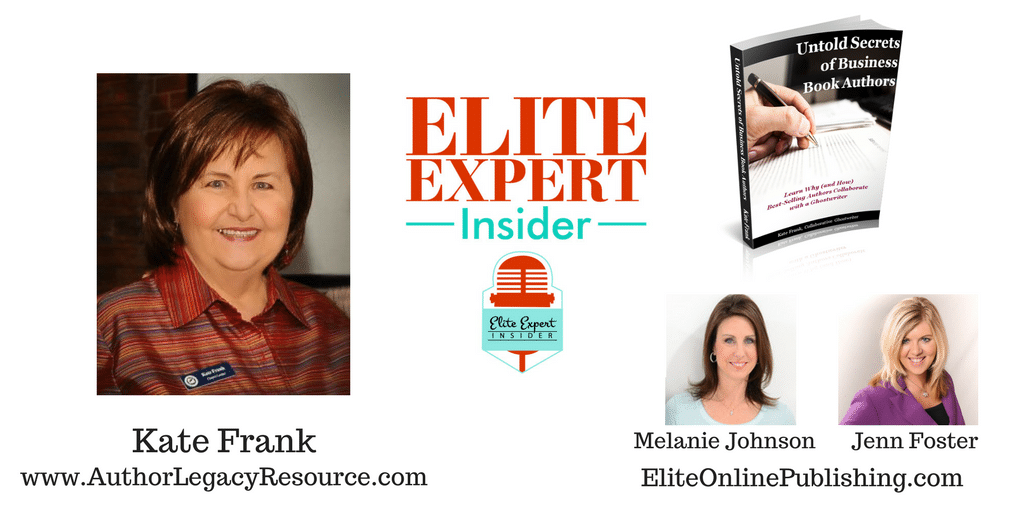 Yet you hesitate to venture into the unknown world of book authoring and publishing. You are an expert in your industry, but the business of creating a published book is completely different. You yearn to release your wisdom into the world and watch people and profits grow. You wonder where you would even start. You have an advocate, ghostwriter, rewrite copywriter and publishing connection ready to help make your dreams come true. Meet Kate Frank.  Contact her to help you write your book today.

Watch the PODCAST NOW on Apple Podcast or Stitcher Radio.

Read more and listen to the Podcast! 🙂 Watch the PODCAST NOW on Apple Podcast or Stitcher Radio.